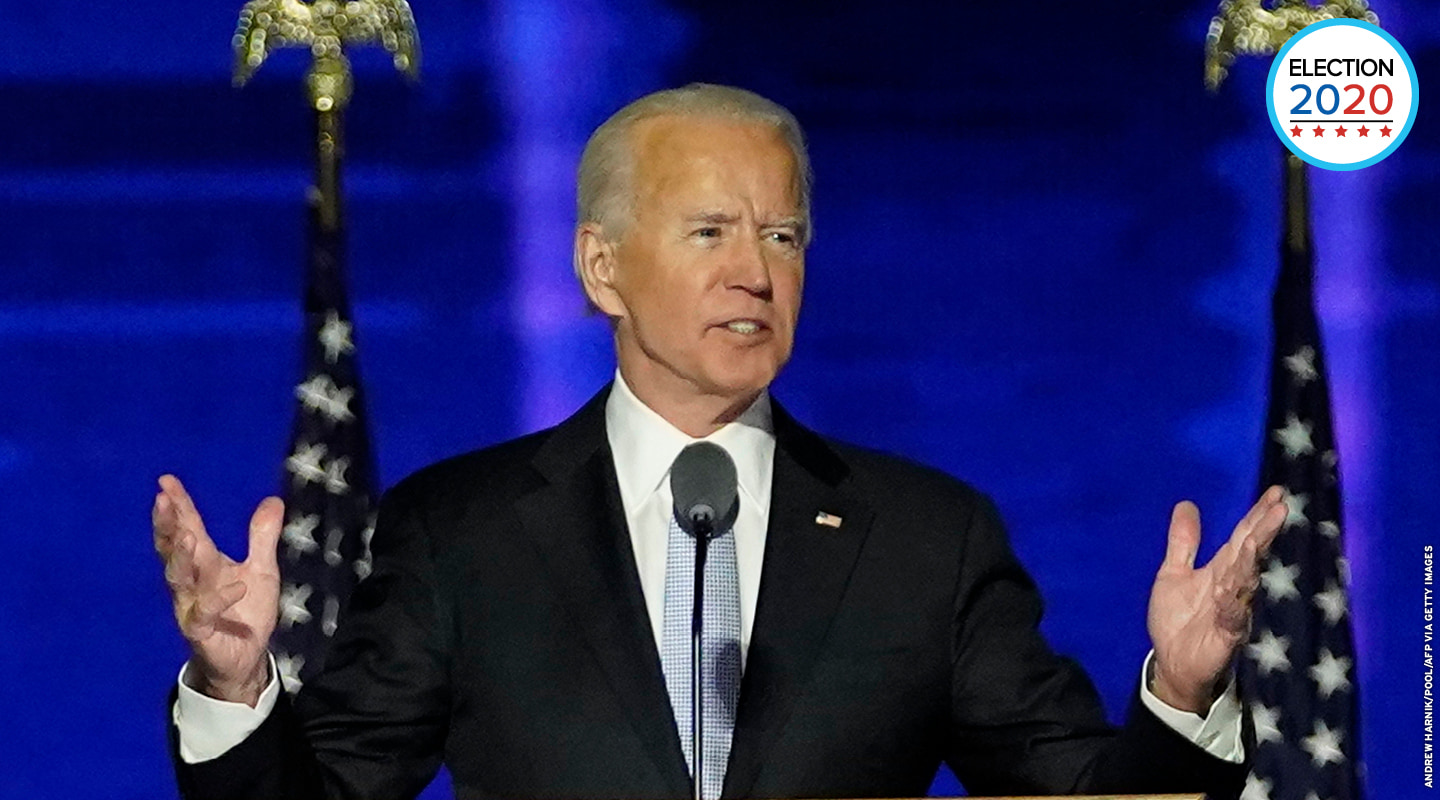 Joe Biden addresses the nation from Wilmington, Delaware, on November 7. Earlier in the day, several major news organizations projected that he had enough electoral votes to win the 2020 presidential election.

Voters across the country have elected Joe Biden as the next U.S. president.

Joe Biden has been projected as the winner of the U.S. presidential election by several major news organizations. More than 145 million popular votes have been counted nationwide. Biden received more than 75 million of them.

Wins in 23 states and Washington, D.C., pushed Biden past the magic number of 270. (Click here to learn more about the Electoral College.)

After one of the most divisive elections in U.S. history, most mainstream news outlets, including the Associated Press, The New York Times, and The Wall Street Journal, projected on November 7 that former Vice President Joe Biden, a Democrat, had enough electoral votes to win the presidency.

As of November 13, a winner had been projected in all 50 states. Biden and his vice presidential running mate, U.S. Senator Kamala Harris, had secured 306 electoral votes. President Donald Trump, a Republican, and his running mate, Vice President Mike Pence, had 232. A candidate needs at least 270 electoral votes out of 538 to win the presidency. (Click here to learn more about the Electoral College.) Harris will be the country’s first female vice president, as well as the first Black American and the first Asian American to hold that office.

Trump, however, has not yet conceded the election and has filed lawsuits in some states over the counting of ballots.

About 160 million Americans voted—more than in any previous election, according to estimates by the U.S. Elections Project. That figure represents about 66 percent of the voting-eligible population. But the final electoral results largely depended on voters in a handful of swing states, including Michigan, Nevada, Ohio, Pennsylvania, and Wisconsin.

In terms of the popular vote, Biden has won more than 79 million votes so far, while Trump has won more than 73 million. However, the popular vote totals remain unclear in several states. That’s because tens of millions of Americans nationwide voted by mail, many more than in any previous election. Processing mail-in ballots can be time-consuming, and many are still being counted. Still, experts say the outcome of the election is unlikely to change.

In the congressional races, Democrats keep a majority of seats in the U.S. House of Representatives. But experts say we won’t know which party will have a majority in the U.S. Senate until January, when two special Senate races will take place in Georgia.

The race between Biden and President Donald Trump was too close to call on Election Day. Hundreds of thousands of mail-in ballots still had to be counted. As election workers continued counting in several key states, Biden built up a big enough lead to be projected as the winner.

Trump, however, has not yet conceded the election. His campaign team has announced that it would insist on a recount of the votes in Wisconsin and Georgia. In those states, a candidate is allowed to ask for a recount in elections where the results are especially close.

Trump’s campaign has also filed lawsuits in several states. He believes that the vote count is incorrect. So far, there is no evidence to support this claim.

This election has already been unlike any other in U.S. history. Never before have Americans had to cast their ballots during a pandemic, fearing that going to the polls might expose them to a potentially deadly disease.

Earlier this year, many states changed their voting rules and procedures to keep voters safe and to allow more people to cast their ballots by mail. In addition, tens of millions of Americans cast ballots in person during early voting periods before Election Day to avoid crowded polling places on November 3.

Kamala Harris will be the country’s first female vice president, as well as the first Black American and the first Asian American to hold that office.

On Saturday night, Biden made a victory speech. “I will work as hard for those who didn’t vote for me as those who did,” he told the crowd in Wilmington, Delaware, and millions watching at home.

The victory will make history in more ways than one. At 77 years old, Biden is the oldest person ever elected president. Also, his vice president, Kamala Harris, will be the first woman to ever hold that office. The U.S. senator from California will also be the first Black woman and first Asian American elected to the second-highest position in government.

“While I may be the first woman in this office, I will not be the last,” Harris said during her speech in Wilmington. “Because every little girl watching tonight sees that this is a country of possibilities.”

When Biden becomes the nation’s 46th president on January 20, he will face enormous challenges. A top priority will be tackling the coronavirus pandemic, which has killed more than 248,000 people in the United States and affected nearly all aspects of daily life over the past eight months.

Indeed, in pre-election surveys, voters said the pandemic was one of the most important issues facing the nation. Biden has called for a federal plan to contain the virus, including more widespread testing, more equipment for hospitals and medical workers, and more funding for treatment and vaccine research.

Another major issue was the U.S. economy, which has been weakened by the pandemic. Millions of people have lost their jobs, and more than 100,000 businesses have permanently closed. Biden says that to save the economy, the U.S. government must provide businesses with more help to reopen safely. He also says that he will hold companies responsible for following safety standards to protect workers. Other key issues for voters included health care, immigration, addressing racial injustice, and protecting the environment.

Biden also faces the task of uniting a deeply divided nation. In a speech on November 7, he pledged to be the president for all Americans—not just those who voted for him.

“For all those of you who voted for President Trump, I understand the disappointment tonight,” Biden said. “I’ve lost a couple times myself. But now, let’s give each other a chance. It’s time to . . . lower the temperature, see each other again, listen to each other again.”

He added, “This is the time to heal in America.”

On December 14, the Electoral College will make the election results official. If the current results hold up, Biden would become the nation’s 46th president after taking the oath of office in January.

Before then, Biden will work on setting his agenda for the next four years. The president-elect says his biggest goal is stopping the spread of Covid-19. He also says he wants to unite the country after a challenging election season.

“With full hearts and steady hands, with faith in America and in each other, with a love of country—and a thirst for justice—let us be the nation that we know we can be,” said Biden.

Democrat (n) a person who belongs to or supports the Democratic Party, one of the two main political parties in the United States. Democrats tend to support social and political reforms.

Republican (n) a person who belongs to or supports the Republican Party, one of the two main political parties in the United States. Republicans tend to favor tradition and stability over social and political reforms.

House of Representatives (n) one of the two chambers of the U.S. Congress. Its 435 members serve two-year terms.

Senate (n) one of the two chambers of the U.S. Congress. Its 100 members serve six-year terms.

economy (n) a system for making, buying, selling, and distributing products and services within a country, a region, or an industry

projected adjective. predicted or forecasted something based on current information or trends

popular votes noun, plural. the votes cast by regular citizens, rather than electors. In a presidential election, the popular vote includes tens of millions of votes.

candidate noun. a person who is running for an elected position

conceded verb. admitted defeat in an election or a competition

campaign noun. an organized effort to try to reach a goal, such as winning an election

oath of office noun. a promise that a person makes before taking on the duties of a job (usually a position in government)

agenda noun. a list of things that need to be done or discussed

Election map results last updated: November 18th at 4:00 PM based on reporting from The New York Times
A candidate must win at least 270 electoral votes—a majority of the total 538—to become president.