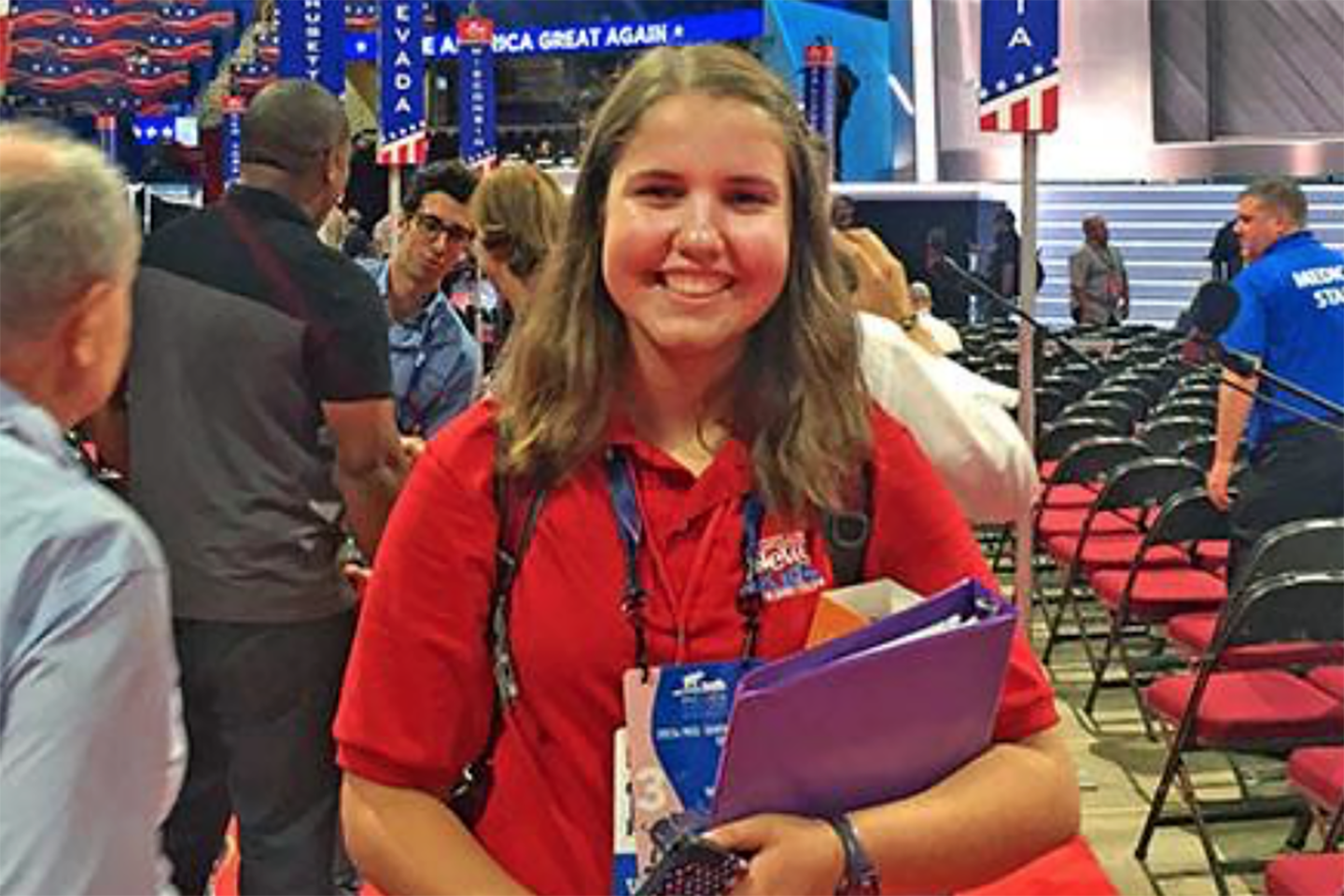 Editor’s note: Kyra was a Kid Reporter in 2015-2016. We recently asked her to reflect upon her experiences covering the 2016 presidential campaign.

At the start of this semester, I reported on the coronavirus pandemic for my college newspaper. I was out in the field, talking with fellow students as they moved into their dorms wearing face masks. It wasn’t how I pictured the start of my sophomore year, but if I’ve learned anything from being a journalist, it’s that the best stories can start anywhere.

My name is Kyra O’Connor. I’m a 19-year-old student journalist from Dublin, Ohio, and a sophomore at Elon University in North Carolina. I started writing articles when I created my classroom newspaper in fourth grade, and I haven’t stopped.

When I was 13, I was chosen to be a Scholastic Kid Reporter. I remember the exact moment I found out. I was at a concert, and my mom pulled me from backstage to give me the envelope that had arrived in the mail. That moment is still one of the best of my life because it changed my life forever.

As a Scholastic Kid Reporter, I had the chance to talk to the founder of a nonprofit, a military veteran, a physician, and kids making a difference in their communities. I covered the 2016 presidential election, including Republican debates, rallies, and watch parties for candidates; a town hall for then-Democratic candidates Hillary Clinton and Bernie Sanders; and the Republican National Convention—all before the age of 16. I’ll never forget sitting down next to a professional reporter at a Republican candidate’s watch party. She leaned over and said, “It’s my first watch party.”

When I attended the first Republican debate, I was given the best lesson of my life. I stood next to my dad, feeling nervous and out of place as seasoned journalists swarmed around one of the candidates, a well-known United States Senator. Suddenly, the lighting operator I’d been talking with propelled me forward, pushing me into the crowd. I stumbled and turned around to see him giving me a thumbs-up. I was pushed, literally, into putting up my Scholastic Kids Press microphone and asking the Senator a question.

That gave me the confidence to chase down answers the rest of the night, and to not doubt myself just because I was younger than the other reporters around me. A year later, I would be given a piece of advice, this time in words, about being an up-and-coming reporter. A radio host and political analyst told me at the Republican Convention in Ohio, “You're doing the first part of my advice: Get there!”

Kyra interviews an Ohio voter at the polls in 2016.

To all of the Kid Reporters covering Election 2020: Telling the stories of an election is a huge responsibility, and one you’re ready for. You’re helping other kids understand how government shapes their lives. Someday soon, they’re going to be old enough to vote, too.

Your work will make a difference. From one Kid Reporter to another, I’m proud of you. Now “get there!”