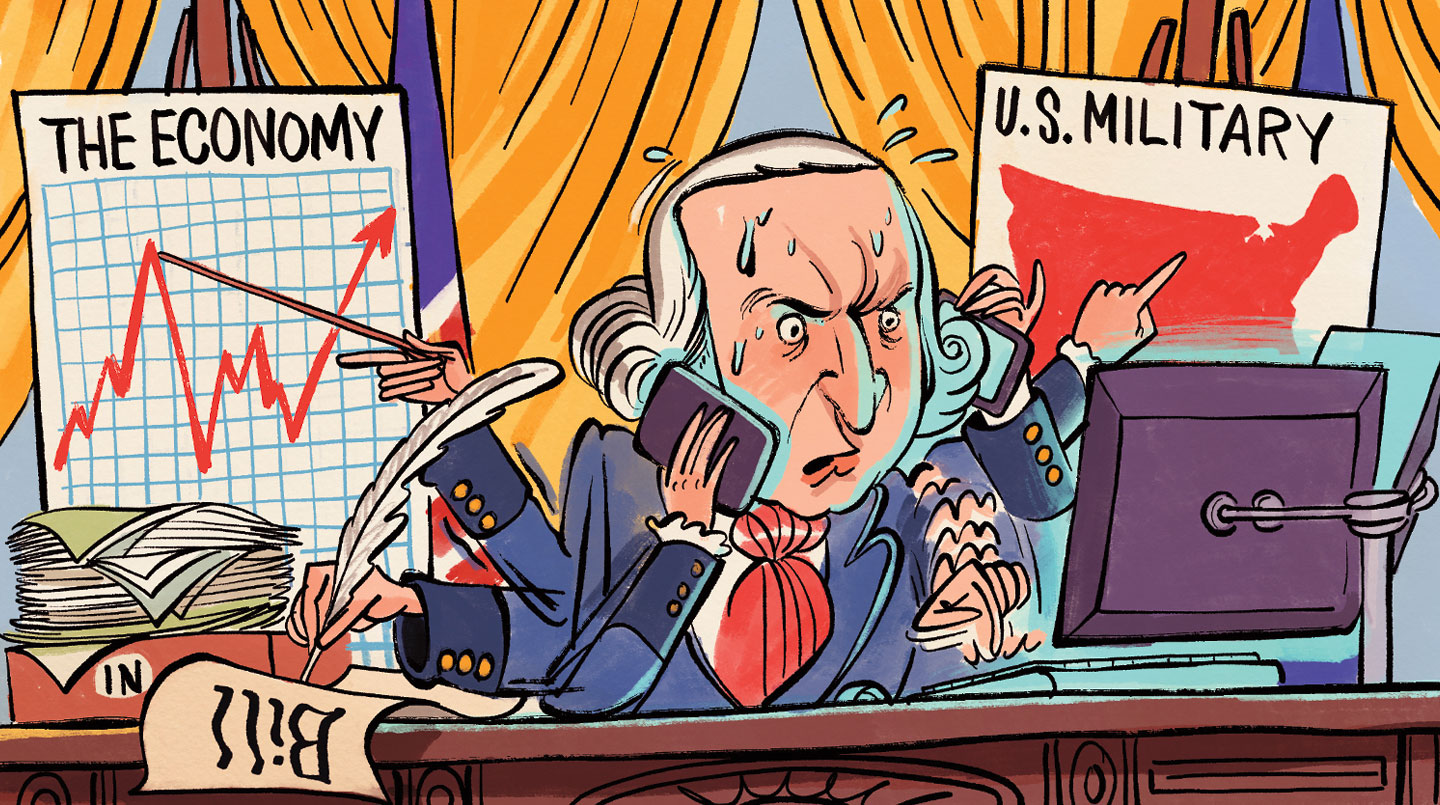 The Many Jobs of the President

Leading our nation is one of the most difficult jobs in the world. The president has many responsibilities. Here are some of them.

The U.S. presidency is one of the most powerful positions in the world—and its responsibilities are huge. Get an inside look at one seriously busy job.

The president of the United States leads one of the most powerful countries in the world, so it’s no wonder that the job comes with huge responsibilities. Most of the president’s basic tasks are outlined by Article II of the U.S. Constitution. Others were created by acts of Congress or through tradition. All together, they form a position of great authority—and enormous responsibility. Here’s a look at the seven main roles that make up the tough job of our nation’s president.

Chief of the Executive Branch

Chief of the Executive Branch

In this role, the president oversees the major government departments and tries to make sure the nation’s laws are followed. The president chooses members of his or her Cabinet (a group of officials who advise a leader), federal judges, and Supreme Court justices, all of whom must be approved by the Senate. The president also submits the national budget to Congress.

The president’s main job is to oversee the federal government, which is made up of more than 2 million employees. To keep it running smoothly, each president chooses a group of senior advisers called a Cabinet. They supervise government departments, including Defense (which oversees the armed forces) and Education. George Washington’s first Cabinet consisted of just four people. Modern presidents’ Cabinets are much larger. President Donald Trump, for example, has more than 20 Cabinet-level advisers.

The president is also the head of the executive branch of government, which is the branch responsible for enforcing laws. Although laws are passed by Congress, the president decides which ones are most important to enforce—and how to do so. The president also appoints federal judges and nominates people for open seats on the U.S. Supreme Court. The president’s choices for both judges and Cabinet members must be approved by the U.S. Senate.

The president is a leader of foreign policy—the way in which one nation decides to work with other nations. He or she travels the world to meet with foreign leaders and signs treaties with other countries. Before such agreements can take effect, however, they have to be approved by the Senate.

Another crucial presidential task is maintaining America’s role as a world leader. Presidents have to decide what the nation’s relationships with other governments will be like. A president’s goals and actions—including meeting with foreign leaders, often in tough negotiations—make up his or her foreign policy. Presidents also appoint ambassadors, who represent the U.S. to foreign nations.

The president has the sole power to negotiate treaties. Treaties serve important functions, such as ending wars or promoting trade. Before such agreements can take effect, however, they have to be ratified, or approved, by the Senate.

The president plays a key role in shaping his or her political party’s positions on major issues. Presidents also help raise money for their party. And they campaign for other party members who are running for office.

The president serves as the leader of his or her political party and plays a key role in shaping its positions on important issues. Presidents help raise money for the party and campaign for members who are running for office. Experts say that Barack Obama (2009-2017) reshaped the Democratic Party during his presidency. Under Obama’s direction, the party became much bolder in its support of rights for minorities and undocumented immigrants.

The president is the most important representative of our country. As head of state, the president has many ceremonial, or formal, duties. For example, he or she hosts dinners for important visitors from other countries, gives awards to military heroes, and calls Super Bowl winners to congratulate them.

As the head of state, the president acts as the highest living symbol of our country. When presidents welcome Super Bowl champions or host official dinners at the White House, they are representing the nation. Americans look to their president for inspiration, especially when he or she engages with foreign leaders. The president’s actions are expected to represent the nation’s highest ideals and commitment to democracy.

Guardian of the Economy

Guardian of the Economy

The president monitors the U.S. economy. He or she may set up government programs that help Americans get jobs and allow businesses to do well.

The president shares responsibility for the economy with Congress. But as the nation’s chief executive, he or she is expected to help it run smoothly—and as fairly for all Americans as possible. Overseeing the economy includes many factors, such as trying to keep the unemployment rate down and aiding businesses. Every year, the president proposes a budget for the country. This determines how much money each part of the government, such as the military, will get to operate. Congress adds its own priorities—and sometimes changes the president’s suggested budget completely. The final budget must be passed by Congress and signed by the president.

Commander in Chief of the Armed Forces

The president is in charge of the entire U.S. military, including the Army and the Navy. Only Congress can declare war, but the president can send troops into action in emergencies.

The Constitution divides the power to make war between the president and Congress. Only Congress can actually declare war on another country. But the Constitution names the president as commander in chief of the nation’s armed forces. That means the president makes major decisions on where and when troops will be deployed (or sent into combat), who will lead them, and how the U.S. will use its weapons. The president also has what experts call the “awesome responsibility” of deciding whether to bomb a foreign country. Harry S. Truman (1945-1953) had to make that choice when he ordered atomic bombs to be dropped on two Japanese cities, the action that ended World War II (1939-1945).

The president can suggest laws to Congress. He or she also signs bills into law or vetoes them. Each January, the president gives a big speech to Congress called the State of the Union address. During that speech, the president explains his or her plans for America’s future.

The president can influence legislation in several ways. As a proposed law (called a bill) works its way through Congress, the president will call members of the Senate and the House of Representatives to urge them to vote for or against it. He or she may also invite members of Congress to the White House to discuss a proposed bill.

Presidents have another tool when it comes to new laws passed by Congress: They can veto, or reject, legislation they don’t like. But Congress can override the president’s veto by a two-thirds vote of both the House and the Senate.

Video: So You Want to Be President?

What the President Can’t Do

Being president of the United States is one of the most important jobs in the world, but there are limits to a president’s power. That’s just how the Framers of the U.S. Constitution planned it. Here are three things a U.S. president cannot do.

A president cannot make laws—only Congress has the power to do that. But he or she can pass executive orders. Those are official directives issued by a president that must be obeyed like laws. Executive orders are far from permanent—a president’s successor can overturn them—but they can be an effective way for a president to quickly change a policy without Congressional approval.

Tell the States What to Do

In many instances, U.S. governors—not the president—make the laws for their individual states. That right is protected under the 10th Amendment, which says “the powers not delegated to the United States by the Constitution . . . are reserved to the States.”  For example, when several states went under lockdown earlier this year to reduce the spread of the coronavirus, those stay-at-home orders came from governors, not President Trump.

According to the 22nd Amendment, which was ratified in 1951, a person can be elected to the U.S. presidency only two times, for a total of eight years. Franklin D. Roosevelt was the first and only president to serve more than two terms—from 1933 to 1945. But his lengthy time in office created fears of presidential dictatorships and worries about his failing health. Those concerns led lawmakers to push for presidential term limits.

Article
The Three Branches of Government
Quiz
Can the President Do That?
Quiz
Who Can Run for Office?

(n) a country’s system for managing its money and resources (such as workers and land) to make, buy, and sell goods and services