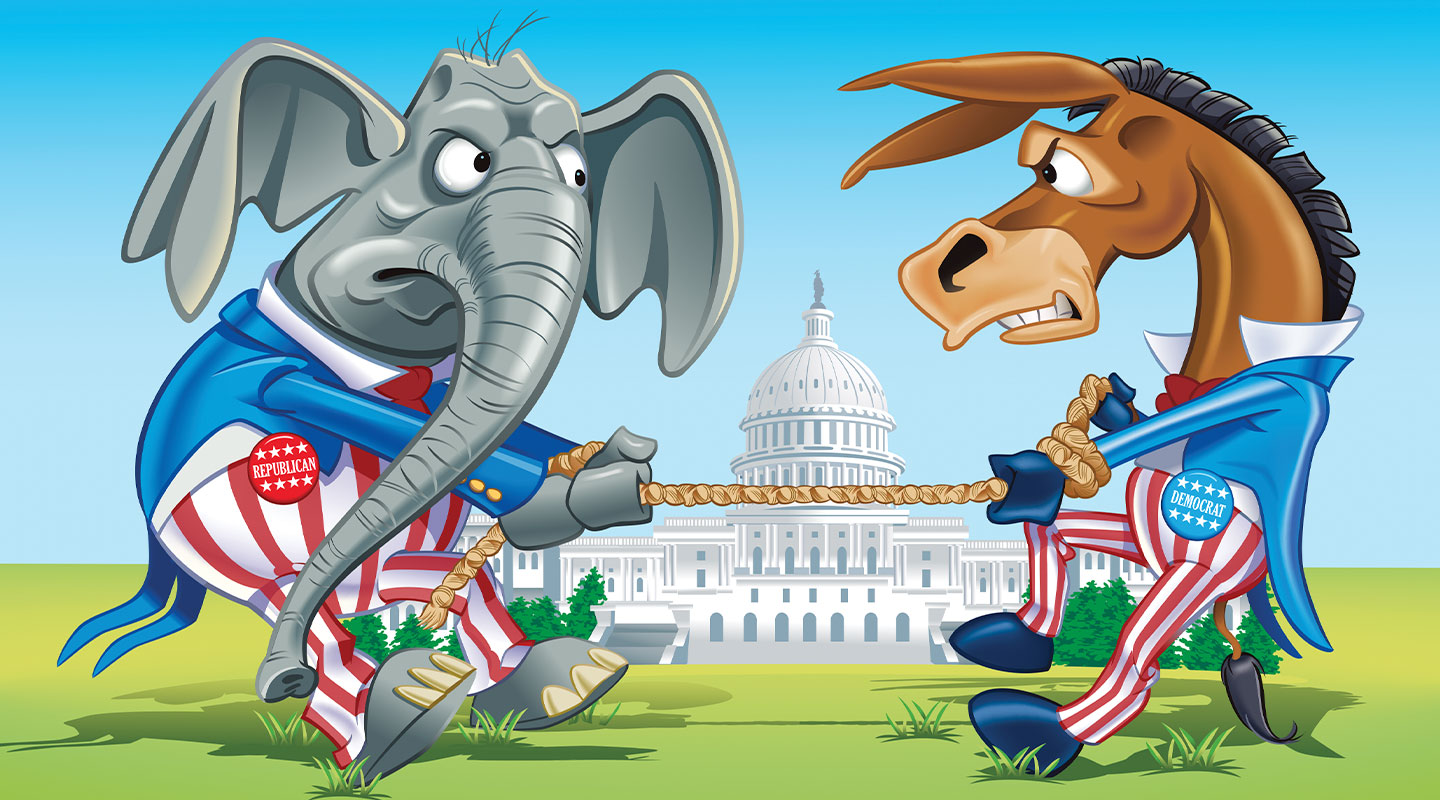 Life of the Parties

You don’t need an invitation to learn about political parties. Here’s what you need to know.

Here’s your invitation—to learn about the role of political parties in the United States.

What is a political party?

Nope—no cake or gifts here. A political party is an organization of voters who have similar ideas on how the country should be run. Parties support their candidates in local, state, and national elections.

People join a political party because they want to support a group that shares their ideas for dealing with issues, or important problems. Want to know where a party stands on the issues? Read the platform on its official website. A platform is a party’s list of plans and positions on key issues.

A political party is an organization of voters who favor similar policies and styles of government. Parties support their candidates in local, state, and national elections. They help voters get to know the candidates by spreading their message and their positions on important issues.

What is the difference between Republicans and Democrats?

What are the main political parties in the United States?

How do you join a party?

You can join a political party when you register to vote. You can change your party by filling out a new voter registration form. You may also choose to be an Independent—someone who doesn’t belong to any political party.

Does a candidate have to belong to a party to run for president?

Why join a party?

Any registered voter can vote for any candidate in a general election. But to vote in a primary election, you may be required to belong to a party depending on where you live. In most states, members of a political party may vote only in that party’s primary. However, some states allow voters to decide which party’s primary they want to vote in, regardless of whether they belong to that party—or to any party at all.

Another reason people join political parties is that they want to support a group that shares their ideas. But within any political party, there are people with a wide variety of viewpoints. You don’t have to share all the positions held by the party to which you belong.

Before joining a political party, you should research where the parties stand on the issues that are most important to you. Then you can decide which party, if any, most closely matches your points of view. A good way to learn where parties stand on specific issues is to read their platforms (available on their websites).

George Washington was the only U.S. president who did not belong to a political party.

Are there parties besides the Democrats and Republicans?

Do you have to belong to a party to run for president?

There are many other parties, all of which are known as third parties. These parties are much smaller and not as well funded as the Democrats and Republicans. As a result, no third-party candidate has ever had a real chance of becoming president.

The Libertarian Party is one of the biggest third parties. Its goals are to expand freedoms for individuals and to limit the power of the federal government. Another is the Green Party. It focuses on helping the environment.

How did the Democrats and Republicans get their animal mascots?

Why are the two major parties represented by a donkey and an elephant?

In 1870, political cartoonist Thomas Nast used the donkey to suggest the stubbornness of the Democratic Party. Four years later, he showed the Republican Party as a clumsy elephant about to step into a trap set by a donkey. The cartoon was a comment on what Nast saw as an unfair campaign being waged by several New York newspapers against the Republican Party.

Are there other parties besides Democrats and Republicans?

Yes. There are many other parties, known as third parties. These parties are much smaller and not as well funded as the Democrats and Republicans. As a result, no third-party candidate has won a modern presidential election, though some have won local, state, and congressional races.

The Libertarian Party is one of the biggest third parties. Its goals are to expand freedoms for individuals and to limit the power of the federal government. Another is the Green Party, which focuses on environmental issues.

What is America’s two-party system?

The U.S. is often described as having a “two-party system” because the Democrats and the Republicans have dominated U.S. politics since the mid-1800s. Today, almost all elected officials are members of one of those two parties. People who support the two-party system argue that it keeps our government stable. They also say that this system makes participation simpler for voters since they have to decide between only two choices. Those who oppose the two-party system argue that it limits voters’ choices and prevents change. They also question whether two parties can truly represent the diverse beliefs and values in a country as big as the United States.

(n) a contest in which candidates are elected to office

(n) a political party's list of positions on different issues