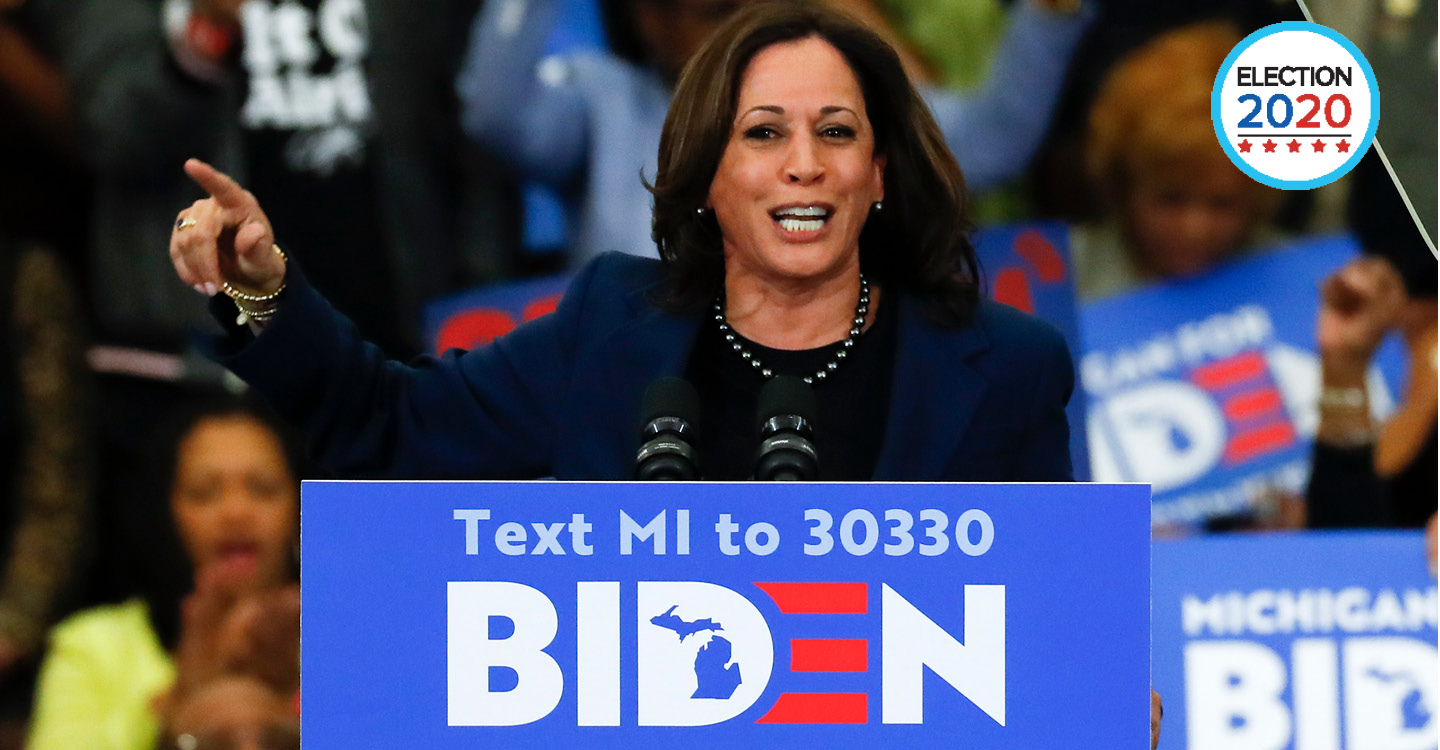 On Election Day, voters will pick either Mike Pence or Kamala Harris for the No. 2 spot in the U.S. government.

On August 11, Joe Biden made history with his choice for his vice-presidential running mate. He selected Senator Kamala Harris of California. She is the first Black woman and first Asian American to be chosen to run for national office by a major party. Together, she and Biden make up the Democratic Party ticket.

They are running against President Donald Trump and Vice President Mike Pence. They make up the Republican Party ticket.

The vice president holds the second-highest office in the U.S. government. But what exactly does the V.P. do? The U.S. Constitution lists just two official responsibilities. First, if the president dies or is unable to stay in office, the vice president takes over as the nation’s leader. That has happened nine times in U.S. history.

Second, the vice president plays an important role in the U.S. Senate. The Senate and the House of Representatives make up the U.S. Congress—the part of the U.S. government that writes the nation’s laws. If there’s a tie vote in the Senate, the vice president casts the deciding vote.

The vice president has other important duties, however. For example, Vice President Pence is one of President Trump’s most trusted advisers.

What makes a good running mate? Presidential candidates usually pick someone who adds something special to their ticket.

When Trump was running for president in 2016, he was new to politics. Pence brought a lot of government experience to the ticket. He was the governor of Indiana at the time and had served in the U.S. House of Representatives for 12 years.

In choosing Harris, Biden fulfilled his promise to pick a woman as a running mate. Supporters say Harris will be a voice not just for women, but other groups that have been underrepresented in government.

Harris is the daughters of immigrants. Her mother was born in India, and her father is from the island nation of Jamaica. In 2010, she became the first African American and first woman to serve as the attorney general of California. The Attorney General is a state’s top lawyer and law enforcement official. In 2016, she became just the second Black woman ever elected to the U.S. Senate.

Until Election Day, November 3, Pence and Harris will campaign to build support for their running mates. They are also scheduled to face each other in a debate on October 7.

Harris, 55, is the first Black woman and the first person of Indian descent to be nominated for national office by a major party, and only the fourth woman in history to be chosen for a major party’s presidential ticket. She has been a vocal supporter of Biden’s since ending her own presidential bid and a prominent advocate of racial-justice legislation since the killing of George Floyd in late May sparked a nationwide movement.

Biden, the presumptive Democratic nominee—Democrats will make his nomination formal at their convention next week—announced the selection over text message and in a follow-up email to supporters: “Joe Biden here. Big news: I’ve chosen Kamala Harris as my running mate. Together, with you, we’re going to beat Trump.’’

Harris said she was honored to join Biden on the ticket. “Joe Biden can unify the American people because he’s spent his life fighting for us,‘’ she tweeted.

A couple of weeks ago, President Trump said Harris would “be a fine choice” as Biden’s vice-presidential pick, though on Tuesday he criticized her as "just about the most liberal person in the U.S. Senate" and his campaign said she and Biden would take the nation down the wrong path. Speaker of the House Nancy Pelosi called Harris’s selection a “historic and proud milestone for our country.”

Harris brings to the race a far more vigorous campaign style than Biden’s, including a gift for capturing moments of raw political electricity on the debate stage and elsewhere. After her own presidential bid fell apart last year, many Democrats regarded Harris as all but certain to attempt another run for the White House in the future. By choosing her as his political partner, Biden may well be anointing her as the de facto leader of the party in four or eight years. At 77 years old, Biden would be the oldest person to assume the presidency, so there is talk about him handing the reins over to his vice president in four years should he be elected.

“This moment is long overdue,” Derrick Johnson, president of the NAACP, said in a statement reacting to Harris’s selection. “For far too long, we have undervalued Black women’s political power and their role in shaping our culture, communities, and country.”

A moderate who spent most of her career as a prosecutor, Harris was seen throughout the vice-presidential search as among the safest choices available to Biden. Her policy views largely mirror Biden’s, and her supporters argued that she could reinforce Biden’s appeal to Black voters and women without stirring particularly strong opposition on the right or left.

Harris has long been regarded as a rising figure in Democratic politics and as a confident representative of the country’s multiracial future. She sought to capture that sense of destiny in her own presidential campaign, announcing her candidacy on Martin Luther King Day in 2019 and paying frequent homage to Shirley Chisholm, the first Black candidate to seek a major party’s nomination.

Throughout her rise, Harris has excited Democrats with a personal story that set her apart even in the diverse political melting pot that is California: She’s the daughter of two immigrant academics, an Indian-American mother and a father from Jamaica. Harris was raised in Oakland and Berkeley, attended Howard University, and pursued a career in criminal justice before becoming only the second Black woman ever elected to the U.S. Senate.

As the vice presidential nominee, Harris will play a key role in getting out Biden’s message during the campaign. She’ll also likely face off in several debates against the current vice president, Mike Pence, the former Indiana governor, who is joining Trump’s ticket for the second time.